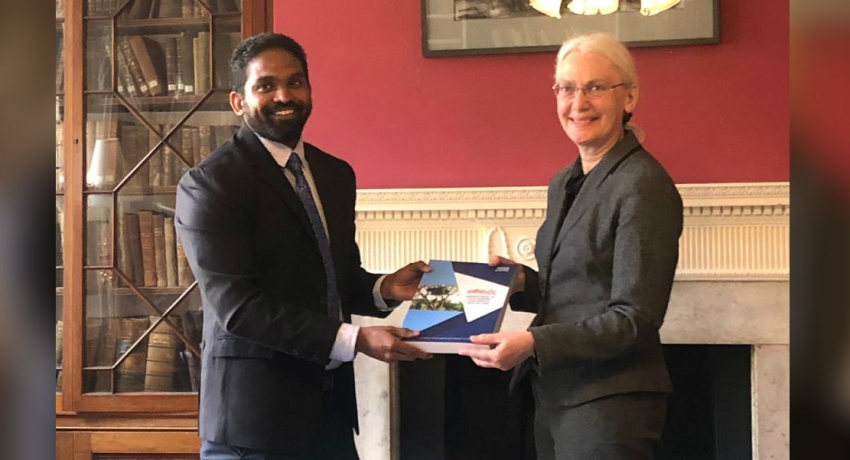 Colombo (News 1st): The Gammadda movement moves ahead with its global acceptance once again after its research report, done together with the University of Peradeniya, was accepted by the Oxford University this morning (June 6).

Changing the lives of millions in rural Sri Lanka, Gammadda has so far also been recognized by many foreign organizations including the United Nations, at the World Humanitarian Summit. Last year, Brown University in the United States, recognized Gammadda as a successful example of the changing nature of rural development around the world.

“This may seem like a difficult task, at present evading poverty particularly, maybe a tall order in an organization like ours which is housed in Sri Lanka. The fact that political instability, political parties playing tug of war with peoples emotions in the country, political parties playing with peoples aspirations and dreams, would we the people live with corruption, deceit, as well as social dividing. It is in this background that The Capital Maharaja Organisation undertook Gammada several years ago, to address the issues of the forgotten people of our nation. I hope the communication will now be placed across the college which will be a focal point for the world to understand what Sri Lanka is going through because we can’t fight poverty alone. We want your help, we want every ones’ help. Despite all this we are a resilient nation, we believe that we can overcome the odds and stand tall one day. But we can’t do it alone as I said before.”

Master of St. Cross College at Oxford University Carole Souter had this say;

“To have the material from all over the world available in our library is very important to us. We don’t simply want to have materials produced in the UK and in Europe that we want to have to share with our students. Material must come from elsewhere and so this information, this data will be very important in enabling people to make their own judgments and to think about their own plans for the future. I am also delighted that our blessed George having consulted our librarian and is able to say that there is nowhere else in Oxford that has this information. So it will become part of our Library system, it can then be searched for and found by our students across Oxford. And so it will become public and will be able to be used by anyone who is looking for this type of information.”

“The overall contacts is about Sri Lanka UK relations, India, UK relations and Sri Lanka and India relations. And while we were in Oxford together we’ve already begun to forge strong ties. And for the next months, those ties will deepen and they will endure after the program. And we in Oxford in the part of the achieving community and I should thank the foreign office of the UK Government to sponsor these evenings programs. We all look forward to building on openings and what you have done is wonderful and I would say thank you and keep in touch”