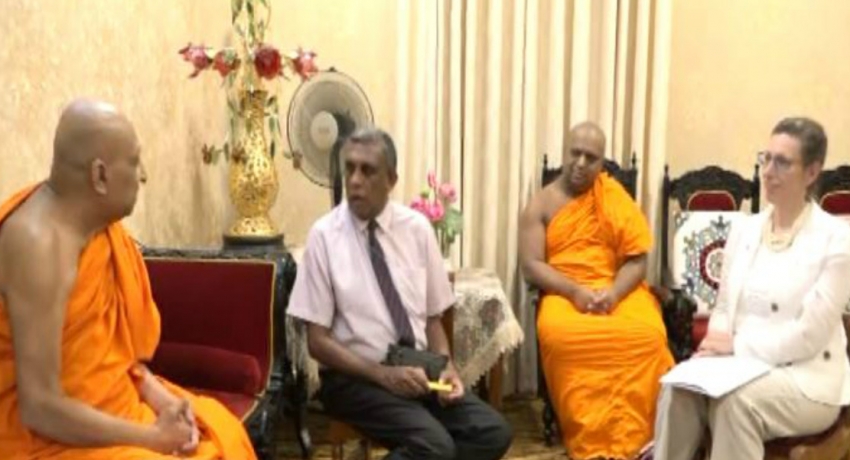 Colombo (News 1st): The Mahanayake of the Malwatte Chapter of the Siam Sect questioned the US Ambassador to Sri Lanka on the Defence agreements between Sri Lanka and the US.

Speaking to Mahanayake US Ambassador Alaina B. Teplitz noted,

“There is indeed a great deal of misinformation that is out there and I thought it was useful to have a face to face conversation so we can understand one another very clearly. And I assure your concern as we discussed in December about the  extremism in Sri Lanka and elsewhere and it is something the United States has been focused on for some time and why I think today the call for social harmony, encouraging moderate voices and finding ways to work together is so important so that people are not further pushed into the extreme corners. “

Speaking to the US Ambassador the Mahanayake noted that America also has accusations against them. He noted that in situations like this, there is no harm to them helping Sri Lanka, without negatively impacting the country.

Responding to this  US Ambassador said,

“No, I think what you are referring to is the visiting forces agreement that we are negotiating with the government. We have not completed our negotiations. The visiting forces agreement is an administrative and logistical agreement that allows us to pre-negotiate many of the arrangements that have to be made when we conduct joint exercises with the Sri Lankan military always at the invitation of the government of Sri Lanka. We already have an existing agreement with the government that dates from 1995 but that is now an old agreement and it is time to update. There are issues that remain to be discussed and need to be worked out so that we can have a clear mutual understanding about what would be agreed. And I know in the media there have been a number of concerns raised around the agreement. Our purpose is to be transparent about agreements and about the nature of the partnership between the United States and the government of Sri Lanka.”

The Mahanayake also noted that the general public must also be aware, therefore it is better if this is publicised.

Responding to this Alaina B. Teplitz noted,

“We have made public always the agreements that we conclude. With other countries because we have visiting forces agreements or status of forces with a 100 other countries, all of those are available publicly.”

The Mahanayake said a majority of them point out that this is dangerous and that’s how they also see it. He noted that therefore it is better if this is conducted transparently. He added that there is an opinion that steps were being taken to place the American military on the island.