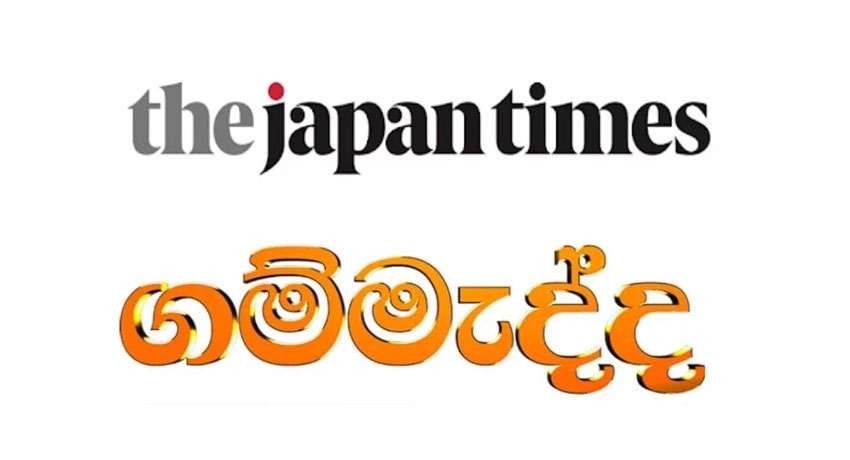 Japans highest-circulated English Daily, The Japan Times has featured Gammadda as a Sri Lankan initiative that “…the world can learn from”.

Here’s the full article, below:

What Sri Lanka has to teach the world

KYOTO – On Easter Sunday in April, the world was shocked to witness the horrific terrorist attacks in Sri Lanka, which struck two international hotels and several Christian churches around the country. The premeditated, planned, and well-coordinated attacks took the lives of 279 innocent people, including a Japanese mother, and injured hundreds more, including her family.

A couple of weeks later, before the shock of the attacks had worn off, cyclonic storm Fani approached Sri Lanka bringing heavy rain and high winds, causing flooding and extensive damage. Fortunately, no deaths were reported in the country with much experience in natural disasters and decades (in the past) of conflict.

In March, prior to the above tragedies, I had the pleasure of reuniting with some friends and colleagues from Sri Lanka, who work for the country branch office of the Asia-Pacific Alliance for Disaster Management, a six-country partnership for disaster reduction and response headquartered in Japan to which I serve as an adviser.

We were participating in an international conference in the Philippines, with the support of the Foreign Ministry.

One of the Sri Lankan participants, Yasarath Kamilsiri, a reporter specializing in disaster affairs, was also a member of a relatively new organization involved in community development called Gammadda. During the week together, he also told me about a youth group associated with the Gammadda Initiative, and shared videos of it with me and answered my many questions. Seeing the spontaneity and enthusiasm of the organization, I am hopeful about the country once wracked by a 25-year civil war and still now by natural disasters (including the 2004 Indian Ocean Tsunami).

We, those of us in Japan included, have much to learn from other countries, including the Philippines and Sri Lanka, especially in the field of disaster response and civil-military cooperation. But it is the student group and the spirit of youth volunteerism to make one’s community and country better and its implications for Japan that I would like to introduce here.

Previously known as Ceylon prior to 1972, Sri Lanka is situated directly below India in the Indian Ocean and is sometimes called the “Teardrop of India.” Despite its size, Sri Lanka has one of the greatest diversity of animal species on the planet.

It is divided into nine provinces, and 25 districts, with Colombo, in the southwest, the capital and largest city. Tea is its main export, with tourism another important industry that has been affected, hopefully just temporarily, by the recent terrorist attacks.

Sri Lanka is a multiethnic country with several religions, Buddhism being the predominant one. Sri Lanka is considered Asia’s oldest democracy, and boasted the world’s first female prime minister, as early as 1960.

The country, which became independent in 1948, has a population of approximately 22 million people. More than half of the population is under 40 years old, but it also has the most rapidly aging population in the region and one of the fastest in Asia as a whole after China, Thailand, South Korea, and Japan.

Sri Lanka has one of the highest literacy rates in South Asia, 92 percent nationwide and 98 percent for its youth. However, its tertiary education remains difficult to access, with only a 5.1 percent participation rate, due in part to the limited number of public universities. Sri Lanka ranks 8th in the World Giving Index, suggesting a compassionate society in volunteering and donating, despite its not yet being a developed country. Economically, and in other areas, it is a country worth watching.

The country, however, also has numerous problems in health care, access to higher education, poverty, social problems and many areas that are not being properly or adequately addressed.

It was because of this that a news organization in Sri Lanka, Newsfirst, specifically decided to examine these problems at the local and individual level beginning in 2013, calling it Gammadda, which is Sinhalese for “amid the village.” Subsequently, partnering with a local university, it conducted household-by-household surveys of the problems residents faced in 2016, 2017 and again in 2018. The United Nations recognized this initial information-gathering effort at the first-ever World Humanitarian Summit held in Istanbul in 2016.

But the Gammadda initiative was not limited to information-gathering alone. The effort transitioned into providing solutions for community development, or “action out of facts.” Using the young people in the news agency, several hundred specific projects were identified, and a timeline of 100 days was assigned to complete as many as possible through partnerships with the community and other young people. Amazingly, every single community development project was accomplished.

A second 100-day challenge was launched, followed by a 1,000 project challenge.

Using the networks the media agency and its partners have developed in all areas of society, combined with the power of technology, it has been able to be quite successful in the few short years since it started.

One of the key components of this success has been the volunteer force of young people Gammadda created, who are able to access information online about activities and events. This group, appropriately, is known as Gammadda V-Force and operates under the motto “The Courage to Care.”

I see great potential for such a national-level partnership between the private sector, media, universities, NGOs/NPOs, and local municipalities (particularly those that are suffering from population decline), to address problems here in Japan. I can think of a 1,000 small to medium-size projects myself that need addressing. Fortunately, today’s young people, despite what some people might think, are engaged and interested in these issues. I hope their energy, passion, and intelligence can truly be tapped.

Particularly, there are many things that need to be done, including cleaning up Tokyo’s streets, subway and train stations, and other things prior to Japan’s hosting the Olympics next summer. It would be great to involve everyone in that effort.

Currently, it appears Japan only has three sister-city relationships with Sri Lanka. If there were more, perhaps some Japanese communities would have learned about Gammadda and tried to introduce it into their communities or areas. I always encourage Japanese cities, towns, and villages I visit to pursue more sister-city relationships and often write about the need for Japan to expand such relationships as part of its public diplomacy. And this is yet another reason why it should: to expand its ability to gather information and ideas.

I hope Japan and other countries can learn from Sri Lanka’s private sector effort to address public policy issues. In doing so, it and the world can develop greater connections with the country suffering from the horror of the recent attacks and provide hope for it and for ourselves.

To learn more about Gammadda, please visit its website (www.gammadda.lk/), or better yet, create a sister city partnership with Sri Lanka and get involved that way.