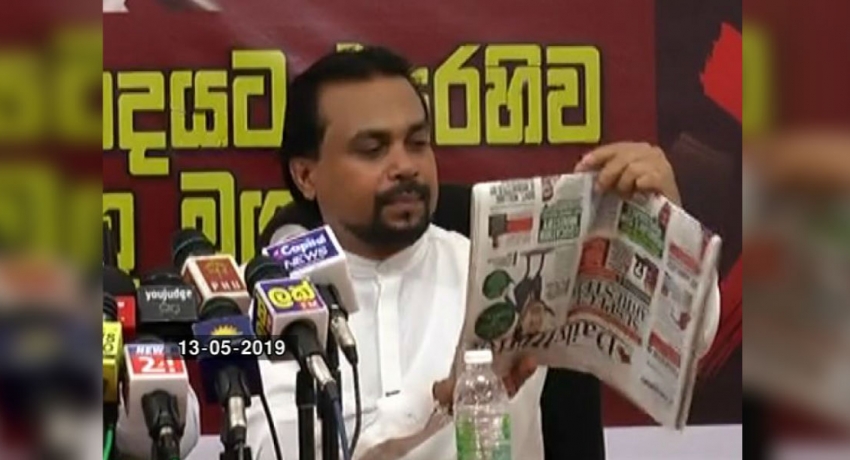 Ranil Wickremesinghe noted that Sri Lanka should leave the catastrophe behind and resume day to day life normally. He added that he would discuss with countries that have issued travel advisories on visiting Sri Lanka. He said that several foreign intelligence personnel who had arrived in Sri Lanka as citizens of their respective countries were victims of the 4/21 attack. He finally noted that they should focus on getting rid of travel advisory to bring back Sri Lanka on track.

Field Marshal Sarath Fonseka noted that any nation would provide adequate intel on ISIS threat if requested and it was not necessary to bring foreign service boots on the ground to resolve the matter.

MP Wimal Weerawansa, Leader of the National Freedom Front, noted that Ranil Wickramasinghe intends to bring down foreign troops into the country with the cover story of consulting foreign intelligence service experts. He noted that “HIGH-LEVEL TALKS BETWEEN US & SRILANKA” in Daily Mirror reports that according to the US secretary, Sri Lanka and the US are to sign another agreement. The MP declared that when Gotabaya Rajapaksa was the Secretary of Defence, an agreement was signed to supply fuel to ships that provide services to Sri Lanka and this agreement was signed off for 10 years which has expired now. He said that the agreement which was only 4 pages long had been increased to 80 pages and has agreed to allow US forces to enter the country in a state of emergency. Weerawansa continued saying that astonishingly none of the documents regarding this agreement was presented before the parliament and an adjournment motion debate will be held on Friday in Parliament. Finally, the MP noted that they urge the Premier and the President to submit these agreements which are “already signed and to be signed”.

UPFA MP, Vasudeva Nanayakkara noted that despite the premier’s statement that foreign intelligence services are to support Sri Lankan forces, all they do is conduct their own investigations. He said that the president and the prime minister are declaring two contradicting statements on the matter as the president states that the situation is contained to an extent while the prime minister believes Sri Lanka needs foreign services to resolve the crisis.

Wasantha Samarasinghe, Convener to Voice Against Corruption noted that Ranil Wickremesinghe always succumbed to the international political arena and could not get his mind off the US. He said that if the premier was confident regarding the foreign security forces “why cannot he get Arjun Mahendran extradited?” He noted that if Ranil Wickremesinghe cannot live in Sri Lanka he should leave Sri Lanka for good with his party.