Colombo (News 1st): Seventy Sri Lankans who made the illegal boat journey to Reunion Islands were arrested. They will be flown back to Sri Lanka on Thursday (Feb 14). The Department of Fisheries and Aquatic Resources said that the group will return under the custody of French Authorities.

On January 26th, the owner of a Multi-Day Fishing Boat had filed a complaint with the Negombo Police. He claimed that his boat which set off to sea on the January 9th had gone missing. The fishing boat was named “Ve Prashansa”.

Following an investigation, it was revealed that the skipper of the boat had charged between Rs. 100,000 to Rs. 1 million each to smuggle a group of 70 people to Reunion Island, a French colony in the Indian Ocean. The boat had reached the island on February 5th. Among the 70 people are 05 children and 08 women. They are residents from Batticaloa, Kandy, Jaffna, Puttalam, and other rural areas.

Owner of the Fishing Vessel Sudarshan Perera said he sent out his trawler from the Negombo Fisheries Harbour as usual. He later came to know that the skipper had been using his multi-day fishing vessel to smuggle people to a different country. Perera had informed the Negombo police and the Colombo Crimes Investigations Department.

Fishermen said that the people were promised refuge in the country but were tricked and scammed. They believed that if this is not stopped the fishing vessels will be used to smuggle people without the knowledge of their owners.

The Reunion Islands is French territory. The distance from Sri Lanka to this tourist hotspot is roughly over 2200 nautical miles. If a vessel is to travel at 10 Knots it will take roughly 9 days and 5 hours to travel to the island from Sri Lanka.

Director of Operations at the Department of Fisheries and Aquatic Resources Kalpani Hewapathirana said that the people had been deceived with the promise of residency at the Reunion Islands. She added that this was an attempt to revive human trafficking. Previously people were smuggled to countries like Italy and Australia from Sri Lanka. 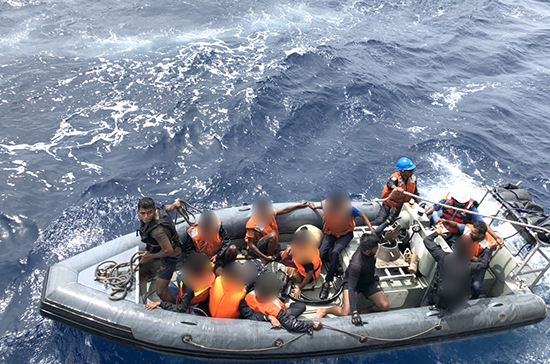