COLOMBO (News 1st) –  Officials of the Tangalle Environmental Division received a tip-off that a group of people using vehicles of the Tissamaharama Pradehsiya Sabha were engaged in soil excavation in the Uddakandara Lake reserve area. A raid was carried out and five tractors, an excavator and several suspects were taken into police custody.

Chairman of Tissamaharama Pradeshiya Sabha W.G. Upul arrived with several SLPP members of the Pradeshiya Sabha and confronted the officials of the Tangalle Environmental Division. The arrested persons were ordered to come to the Kirinde police station. On the way the suspects stopped their vehicles near Yoda Kandiya and refused to go to the police station. A tense situation arose and the Police Special Task Force was called in after which the group left with the vehicles.

The News1st team inquired about the manner from the Chairman, Tissamaharama PS and he said that the soil was being excavated for road development activities in the area. He added that the Tissamaharama Divisional Secretariat had granted permission for the excavation. 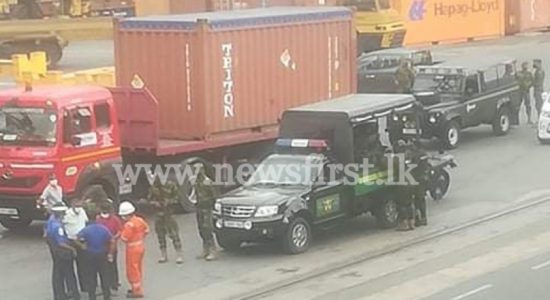