SC refuses to dismiss interim order against MR and Cabinet

SC refuses to dismiss interim order against MR and Cabinet

COLOMBO (News 1st) – The supreme court today (December 14) did not vacate the interim injunction issued by the court of appeal restraining Mahinda Rajapaksa and his cabinet of ministers, deputy ministers and state ministers from functioning in their respective portfolios. However, the Supreme court granted special leave to appeal for the four petitions filed before the supreme court.

Justices Eva Wansundera,Buwaneka Aluwihare, and Vijith Malalgoda considered the petitions that were filed against the interim injunction issued by the Court of Appeal. The Supreme Court decided to further hear the case on the 16th, 17th and 18th of January 2019. However, all parties were informed to file written submissions within a period of three weeks.

122 MPs including Ranil Wickremesinghe filed a petition at the court of appeal on the 23rd of November against Mahinda Rajapaksa, his cabinet ministers, deputy ministers and state ministers from functioning in their respective positions. It was considering this petition on the 3rd of December that an interim injunction was issued barring them from operating in their portfolios.

A group including Mahinda Rajapaksa filed 4 petitions at the supreme court requesting for the interim injunction issued by the court of appeal to be vacated.

Presidents Counsel Romesh Silva appearing on behalf of the petitioners requested for the matter to be considered today as this involves a matter of public importance. He added that as per article 132 of the constitution the supreme court must consider such matters and deliver a verdict within a period of two months. The president’s Counsel added that the party of the respondents headed by Ranil Wickremesinghe have also accepted this.

Presidents Counsel Gamini Marapana appearing on behalf of Mahinda Rajapaksa said that the supreme court has in the past in their verdicts pointed out that such petitions and appeals should be taken up without any delays and requested for the petition to be taken up today and for interim relief to be granted.

Presidents Counsel K. Kanag-Isvaran appeared on behalf of Ranil Wickremesinghe; the 1st respondent named in the petition. He pointed out that the court of appeal issued the interim injunction after deciding that there is no legal right for Mahinda Rajapaksa and government to function after two no-confidence motions have been passed in parliament. Attorney-at-law Suren Fernando stated in court that his client had submitted a motion to the Chief Justice to appoint a 5 judge bench that does not include Justice Eva Wansundera to consider the petition. The attorney said that the request was submitted by his client as Justice Eva Wansundera herself had stated during an interview that she is a close friend of Mahinda Rajapaksa.

Responding to this statement Justice Eva Wansundera said that the motion submitted by Ranil Wickremesinghe was directed to the Chief Justice yesterday (December 13).  She stressed that amidst such a backdrop since she has been appointed to consider the petition and deliver a verdict that she is bound by duty to do so. She added that she delivers verdicts based on the law of the land on not based on individual faces or positions.

Suren Fernando pointed out that once a no-confidence motion is passed in parliament the prime minister and the cabinet of ministers will cease to exist. The Counsel argued that as the matter involves an appointment and removal made in parliament, such a matter can only be heard by the court of appeal. He went on to note that therefore the supreme court has no legal capacity to consider a petition filed against the order of the court of appeal.

The supreme court who considered the submissions of both parties decided to take up the four petitions for consideration today (December 14). 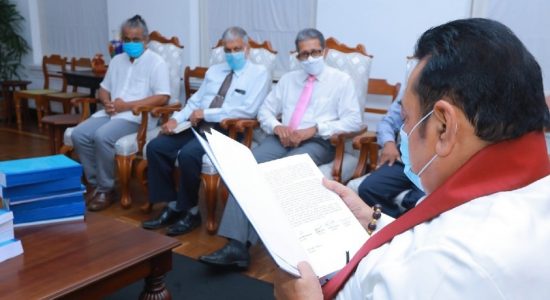