COLOMBO (News 1st) – The Janatha Vimukthi Peramuna staged a protest in Colombo this afternoon, (October 23) demanding a salary hike and to voice their objection against the conduct of the government and the ETF scandal.

The protest which commenced opposite the Welikada prison, marched towards Colombo fort, through the technical junction in Maradana.

According to our correspondents on the field vehicular movement along the roads in Punchi Borella, Kularatna Mawatha and Ananda Mawatha were hampered due to the protest. MPs of the JVP, including the Leader of the JVP MP Anura Kumara Dissanayaka and other party leaders, joined the protest march.

Addressing the protestors, JVP leader Anura Kumara Dissanayake said that the farmers who couldn’t cultivate for four seasons had not received compensation while the fishermen are also suffering from many issues including the fuel prices.

He continued to say that the educated youth in the country, do not have employment opportunities because of the economic policies of Prime Minister Ranil Wickremesinghe. MP Dissanayake also assured the people that the JVP will never allow corrupt officials to come into power and instead would send the corrupt ones in power home. 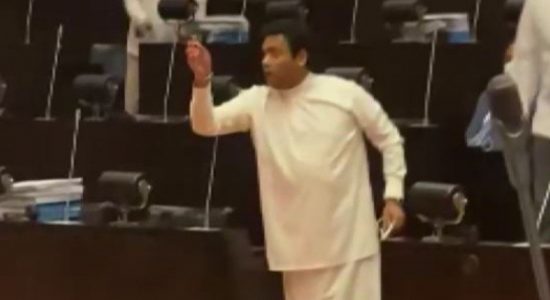