He has been serving as Japan’s Defense Minister since 2017 and is a member of the Liberal Democratic party of Japanese Prime Minister Shinzo Abe.

What’s going on with Japan and Sri Lanka?

Prof. Kennedy Gunawardena of the University of Sri Jayawardhanapura states that Japan is visiting Sri Lanka and looking into our development as well as our relationship with India for a particular reason. Prof. Gunawardena believes that this is not out of affection for our country but because Japan is now a stakeholder of the Asian three plus group. He states that Japan will do their best to take advantage of Sri Lanka through India. He states that Sri Lankan government should be tactful to handle the situation.

Harinda Vidanage, Director of the Bandaranaike Center for International studies commenting on the Japanese Defense Ministers visit states that as a country, Sri Lanka’s National Policy should be to develop relations with countries like China. Vidanage also states that there’s a clear regional competition between India and China, and between other countries such as U.S.A., Australia and especially Japan in the global stage.

Harinda Vidanage states that in the global context Sri Lanka should rethink its foreign policy in a very strategic manner, else we will eventually become collateral damage in a geopolitical power struggle.

Professor Tissa Witharana the Leader of the Lanka Samasamaja Party states that they would like to know what the Japanese defense minister is doing touring Trincomalee and inspecting it. He states that according to information he has received an agreement has already been signed with the U.S.A. to use Trincomalee as a military base.

The Professor further states that the maintenance of this is to be given to India, Singapore, and Japan. He concluded stating that signing of these agreements without disclosing them is completely against our National non-aligned policy.

The general public of the country did not provide a mandate to the government for them to let foreign nations help themselves to geopolitically important locations of our nation.

While all of these giveaways are done under the guise of investments the government now plans on giving away the Palali Airport, the cement factory in Kankasanthurai and the Mattala International Airport to India.

The Colombo Port, the Hambanthota port and the Trincomalee port to Singapore, China and Japan.

The rulers of this nation have to comprehend the Geo-political power struggle that Sri Lanka is in the crosshairs of.

So the question is who gave the Government the right to distribute Sri Lanka’s strategic locations to foreign countries? Is this how they repay the public for their mandate?

Dutch sailors who landed at Mattala airport board ship in Galle 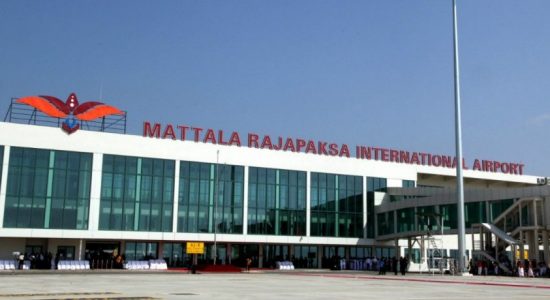 We will focus on winning SLPP as a whole