Colombo (News1st) – Tensions flared in Parliament on Tuesday (Aug. 7th) as the proposal to increase the salaries of MPs and Ministers was taken up for consideration.

The leader of the House, Min. Lakshman Kiriella informed Parliament that the UNP Parliamentary group has unanimously taken a decision to reject the proposed salary increment adding that the issue was initially created in 2006 under the former administration.

MP Wimal Weerawansa joining the debate stated that the UNP group had reached such a decision because a large number of ruling party MPs have been appointed as Monitoring MPs and have been granted an additional allowance between Rs. 200,000 and Rs 300,000. He accused the leader of the house of not revealing the entire picture to the people of the country.

Kiriella responded to this accusation by stating that such a proposal was not passed.

UPFA MP Dinesh Gunwardene joining the debate stated that a final decision was not taken during the party leader’s meeting and that this can only be done by the Government. The MP noted that there is no point in the government screaming about it because it will not happen if the Government does not want it.

MP Gamini Lokuge also echoed the sentiments of Wimal Weerawansa stating that all Government MPs are getting paid Rs. 200,000 each. 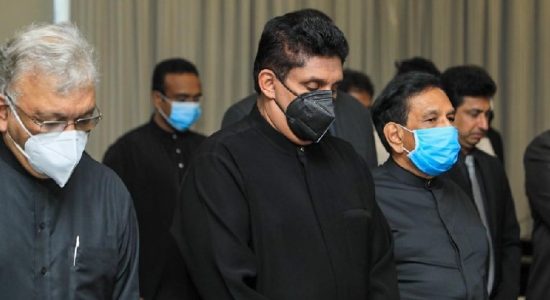