Commuters stranded as trains countrywide come to a standstill

Commuters stranded as trains countrywide come to a standstill

Train travel across the country continues to be at a standstill following a strike action that was launched by train drivers and guards on Wednesday evening.

According to the Railway Control room, all trains operating from Colombo Fort Railway Station will not be in operation today.

About 360 train rides are generally in operation for train commuters across the country, but the Railway Control Room added that only three trains from Kandy, Polgahawela and Galle have arrived at the Fort Train Station this morning.

The railway drivers and guards launched a strike action last evening, without prior warning, in protest to the standardisation of the recruiting procedure of railway assistants.

As a result of the strike, commuters traveling to remote and distant areas from the Colombo Fort Railway Station were severely inconvenienced. A tense situation arose and was later controlled with the assistance of the police.

According to the Chairman of the Railway Guards Association, P. M. P. Peiris, the strike will be in effect until solutions are meted out to their demands.

When News1st made inquiries, the Secretary of the Transportation Ministry, P. S. Vithanage, said discussions that were held at the Prime Minister’s office last evening proved to be “unsuccessful.”

He also added that approval has been granted by the Public Service Commission with regard to the new recruiting procedure of Railway Assistants.

The Secretary also added that it is not a power vested in him to alter the new recruiting procedure of Railway Assistants. 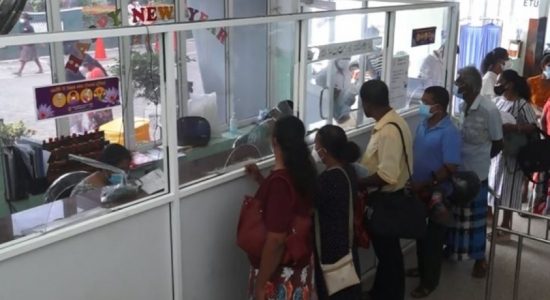