The effects of the strike action by private buses and three-wheelers were felt across the country.

However, the Sri Lanka Transport Board and Sri Lanka Railways continued their operations in order to meet the transportation requirements of the general public.

The SLTB said that it deployed a total of 6100 buses for operations today, Friday, December 2. However, public transport services in several areas were obstructed, damaged and even attacked at times.

Private bus operators and three-wheeler drivers in the Negombo town marched towards the Galkanda Railway Crossing in Negombo this morning.

They then demonstrated on the Chilaw – Colombo Main Road, while the train plying from Fort to Chilaw was forced to stop at the Galkanda Station. As the demonstrators continued to remain at the location till this evening, the Railways Control Room decided to restrict train operations.

Thereafter, police obtained a court order to remove them from the tracks.

A clash broke out between the three-wheeler drivers who did not take part in the strike action, and those who did, at the Chilaw town this morning.

At around 05:10 this morning, stones were hurled at a SLTB Bus plying from Kuliyapitiya to Kurunegala at the Kithawala area.

Two passengers were injured and were admitted to the Kuliyapitiya District Hospital.Stones  were also pelted at an SLTB luxury bus plying from Negombo to Colombo on the expressway, early this morning in Negombo.

An SLTB bus from Kataragama to Colombo was attacked with stones in Tangalle on Thursday night.

Another SLTB Bus came under a stone attack in Thalaramba while operating from Tangalle to Trincomalee.The driver sustained injuries.”Two persons came in a motorcycle. They attacked the bus with a stone causing damage”, he said.

As SLTB buses continued to be attacked with stones since Thursday night, buses were provided with police and army security.

Chairman of SLTB, Ramal Siriwardena said that the IGP and  DIG (traffic) Palitha Fernando held discussions, and that following discussions with the Secretary of Defence, Military Security was requested to areas where it was not possible to provide police protection. Therefore the general public need not have any fear over minor incidents, he said. “We will continue bus operations “, he stressed. 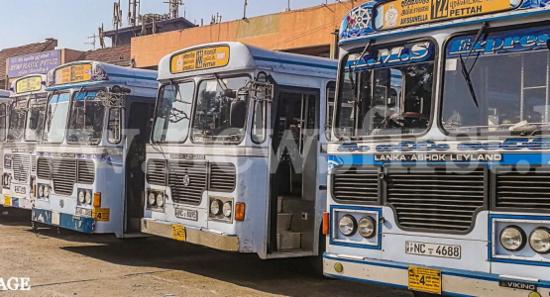