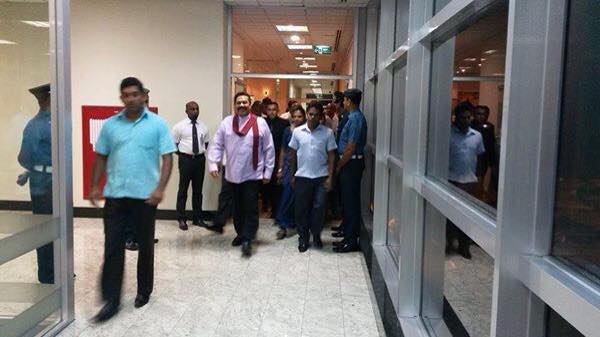 The former president is visiting Uganda to attend the swearing-in ceremony of the Uganda’s President Yoweri Museveni ,upon an official invitation extended by its government.

Former President Mahinda Rajapaksa is being accompanied on this visit by a group including Parliamentarian Gamini Lokuge and the Mayor of Dehiwala/Mt. Lavinia Dhanasiri Amaratunga.

The former president’s media unit said that the invitation is the result of ties maintained between the non-aligned nations in the past.

The swearing-in ceremony of Yoweri Museveni, who was re-elected as the country’s president for the fifth consecutive time, is scheduled to be held on Thursday.

According to Ugandan media reports, heads of state from around the world and sixteen of their representatives have confirmed their attendance for the ceremony.

Foreign media reported that Uganda has declared Thursday a public holiday in view of its President’s swearing-in ceremony.

According to reports former Sri Lankan Ambassador to Russia Udayanga Weeratunga is also among the contingency of Mahinda Rajapaksa, visiting Uganda.

Udayanga Weeratunga’s trip to Thailand alongside Mahinda Rajapaksa on a previous occasion was a topic that was widely discussed in Sri Lanka.

At the weekly media briefing on cabinet decisions on Wednesdy, it was said that the investigations into the various charges being raised against Udayanga Weeratunga have entered a new phase.

Accordingly, cabinet approval has been granted for an agreement to be signed with Ukraine on legal co-operation to combat criminal activity.