Group launches protest opposite Sirasa Headquarters to publicise their woes

Group launches protest opposite Sirasa Headquarters to publicise their woes

In an interesting turn of events, a group of individuals, hoping to get some publicity, arrived at the head office of the Sirasa Media Network on Thursday July 30. The group were wielding a distorted national flag, which was put up at various locations and is currently under investigations.

The group remained at the location at Braybrooke Place, Colombo 02 for a while and then dispersed. Incidentally, a few candidates who are contesting in the upcoming parliamentary election were also seen among the group.

More on the flag in question, police investigations which were launched into the use of the distorted national flag during the demonstrations opposite the Commission to Investigate Allegations of Bribery or Corruption and also at the Parliamentary Complex – are still underway. The matter was also reported extensively in mainstream media.

Meanwhile, Chairman of the Yatinuwara Pradeshiya Sabha Thusitha Kumara was arrested on Thursday on the charge of using a distorted national flag.

According to the Office of the Police Media Spokesperson, the flag was raised at the UPFA rally held recently in Kadugannawa. The local politician was released on bail after he was produced before court. Furthermore, attention was drawn to this incident at the cabinet media briefing held on Thursday. 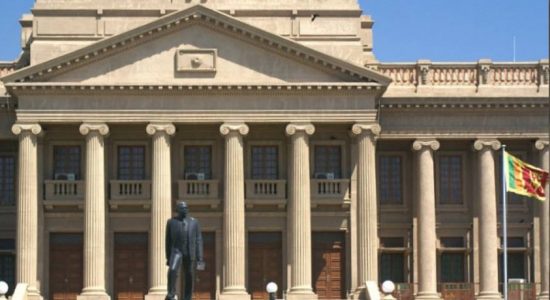