The SLFP commented further on the recent no-confidence motion, speaking at a media briefing held in Colombo on Wednesday, June 10.

General Secretary of the SLFP Anura Priyadarshana Yapa stated that when the statements given by the prime minister in the recent past are observed, it is undeniable that he is slowly losing respect. Yapa said there are 112 signatures that were signed, indicating there is no confidence in him. He went on to note that the prime minister himself invited themselves to come over and take ministerial positions.

In addition to this, he stated that they are working in a manner that takes the subject of the 20th Amendment to the constitution and the “no-confidence motion” as two separate matters.

The following is an excerpt from this media briefing:

Journalist:
You said that the president did not oppose the “no-confidence” motion brought against Prime Minister Ranil Wickremesinghe.

Susil:
We did not discuss this subject at the group meeting yesterday.

Anura:
…This is an action taken in parliament. The no-confidence motion is presented in Parliament. It is not a motion that goes beyond this. The president has allowed subjects under him to be managed efficiently because he upholds democracy..

Journalist:
If the president did not oppose this, does this mean that he supports the no-confidence motion?

Susil:
We cannot make assumptions just because he did not oppose this.

Anura:
We used our exclusive rights in Parliament. This means that the president is an individual who upholds democracy. This is a good sign of his character. Do not involve him in this. This is an action we have taken. We will solve this matter within. 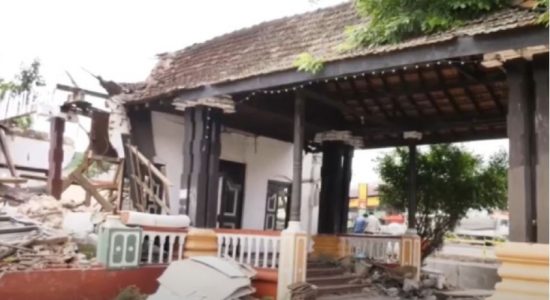