State Minister of Higher Education Professor Rajiv Wijesinha says that although Professor Kshanika Hirimburegama stepped down from her position as Chairperson of the University Grants Commission, she continues to act in the capacity of chairperson.

However, the Federation of University Teachers’ Association or FUTA says that Professor Hirimburegama is not suitable to serve as the Chairperson of the UGC.

Meanwhile, a conflict has arisen, as FUTA says that several changes should be made in the administration of universities.

The Federation of University Teachers’ Associations primary allegation is that the Chairperson of the UGC, as well as certain University Vice Chancellors, took part in political activities of Former President Mahinda Rajapaksa during the run up to the presidential election.

In that very time-frame, several frontline activists of FUTA were actively engaged in the programme of creating good governance of current President Maithripala Sirisena.

After the presidential election, the Federation of University Teachers’ Association launched their demonstration campaign demanding that the Chairperson of the UGC as well as certain vice chancellors resign from their positions alleging that they represented the political activities of Mahinda Rajapaksa. 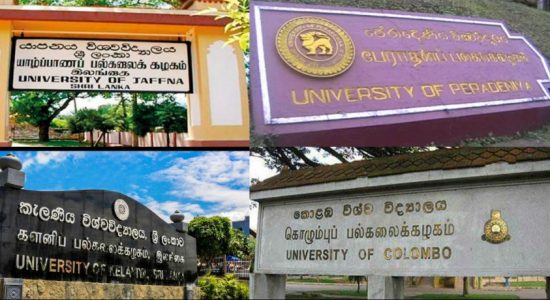 Students may enrolled to universities before June 2015: UGC

UGC on university applications and procedures

Students may enrolled to universities before June 2015: UGC

UGC on university applications and procedures