President Mahinda Rajapaksa says that he will extend an invitation to the newly-appointed United Nations High Commissioner for Human Rights to engage in an official visit to Sri Lanka.

The President made this statement issuing a joint communique following the one-day official visit of the Japanese prime Minister, Shinzo Abe to Sri Lanka.

Prime Minister Abe welcomed the continuing engagement of the government of Sri Lanka with the Human Rights Council and its mechanisms. Japan also expressed its willingness to conduct high-level dialogues with UN High Commissioner for Human Rights and the invitation extended to him to visit Sri Lanka during 2014.

The Prime Minister also stated that they hope to develop their bilateral relations with Sri Lanka and take it to the next level.

President Mahinda Rajapaksa made a request to Prime Minister Abe to lend a helping hand with the reconstruction and development projects in connection to the New Port in Sri Lanka and the International Airport.

Meanwhile, as a result of the Japanese Prime Minister’s visit to Sri Lanka, Japan has pledged  to donate 130 million dollars for the development of digital television in Sri Lanka. 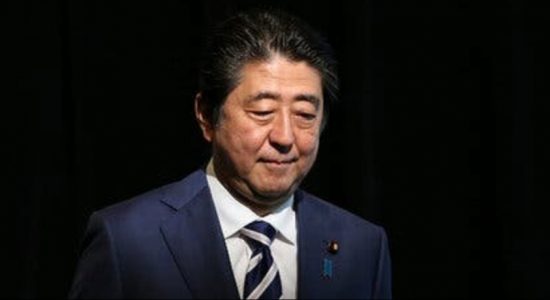 Shinzo Abe heads to US amid surge of diplomacy

Trump to quit North Korea talks if 'not fruitful'

Shinzo Abe heads to US amid surge of diplomacy

Trump to quit North Korea talks if 'not fruitful'