Angelina Jolie wore an Atelier Versace dress embroidered with dozens of designs from her children’s drawings for her wedding to Brad Pitt.

Photos of the August 23 ceremony are to be published in this week’s edition of People and Hello! magazines, which goes on sale on Wednesday.

The cover of the magazine shows a pensive Jolie, 39, in her floor-length white satin dress, with slim straps, a corseted waist and a full skirt.

Her hair is covered by a floor-length veil decorated with brightly-coloured images of flowers, animals and stick men.

The outfit was created by Luigi Massi, the master tailor at Atelier Versace, who sewed the sketches from her six children’s drawings into the dress and veil.

Their sons Maddox, 13, and Pax, 10, walked Jolie down the aisle, wearing black suits to match Pitt’s.

Zahara, 9, and Vivienne, 6, acted as flower girls, tossing petals gathered from the garden.

The children helped write their parents’ vows, the magazine said, and Pax, who was adopted in 2007 aged three, baked a cake for the party.

The ceremony was held at the chapel of their property in France, in the village of Correns – 50 miles north east of Marseille.

Twenty guests attended the marriage at Chateau Miraval, including Pitt’s parents, Bill and Jane; his brother, Doug; sister, Julie, and her two children. Jolie’s father Jon Voight was not present, but he later issued a statement congratulating them. 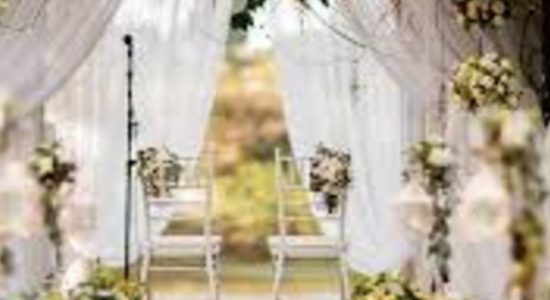