Indian engineers are toiling in the Himalayas to build the world’s highest railway bridge which is expected to be 35 metres taller than the Eiffel Tower when completed by 2016.

The arch-shaped steel structure is being constructed over the Chenab River to link sections of the spectacular mountainous region of India’s northern Jammu and Kashmir state.

The bridge is expected to be 359 metres (1,177 feet) high when completed — surpassing the world’s current tallest railway bridge over the Beipanjiang River in China’s Guizhou province, which stands at 275 metres high.

Work on the bridge started in 2002 but safety and feasibility concerns, including the area’s strong winds, saw the project halted in 2008 before being green-lighted again two years later.

The estimated cost of the project, which is being handled by Konkan Railway Corporation, a subsidiary of state-owned Indian Railways, is $92 million.

The bridge will connect Baramulla to Jammu in the Himalayan state with a travel time of six-and-a-half hours, almost half the time it currently takes.

The main arch is being erected using two cable cranes attached on either side of the river which are secured on enormous steel pylons, according to engineers of the project.

The 1,315-metre long bridge will use up to 25,000 tonnes of steel with some material being transported by helicopters due to the tough terrain. 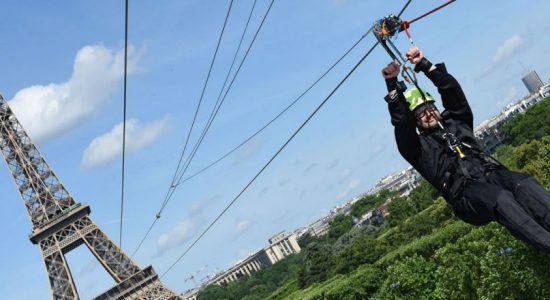