Take it and twist it – S.B. Dissanayake on international report on Sri Lanka

Take it and twist it – S.B. Dissanayake on international report on Sri Lanka

Speaking at separate events held on Saturday, three government ministers expressed the following views on what they called “foreign interference in Sri Lanka.”

[quote]Obama has brought a resolution against us. Your Parliament has already decided that none of these damned persons will be allowed to set foot in Sri Lanka. They will compile a good report on Sri Lanka with various recommendations and get it passed at the United Nations. When it comes to the Security Council, we believe that China and Russia will stand with us. So, when either China or Russia oppose this in the Security Council, there is only one thing left to do. Take it and twist it and poke it ……………………..(edited out) Nothing else can be done. [/quote]

[quote]Today the Americans and the Western nations have banded together and are implementing various conspiracies among the people to destroy this government. We must not forget that. You may have seen last week, that the American ambassador had published newspaper advertisements, for volunteer organisations and NGOs informing them that 200 million had been set aside to show them how to vote. My friends, this is not an attempt to enthuse our people to vote, it is an attempt to destroy our voter base at the coming Presidential Election.[/quote] 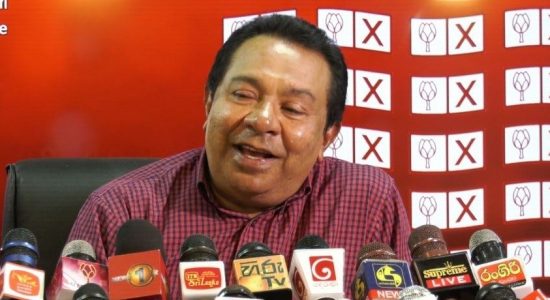