The Disaster Management Centre has warned that there is a risk of landslides and rockslides in five districts. (Photo used for representational purposes)

The Department of Meteorology says an increase in rainfall could be expected between September and December this year due to the El Nino condition.

Director of the Department of Meteorology R.S. Jayasekara said the variations in the temperature of the surface of the tropical eastern Pacific Ocean could cause the El Nino oscillation, noting that all provinces in the island except for the Northern Province will experience heavy showers as a result.

He however noted that rainfall over the country next year would reduce, following the increase this year.

Meanwhile, the Met. Department says that the possibility for increasing Southwest monsoonal wind speeds over the country, particularly along the western slopes of the central hills and suburban sea areas, is still high.

However, the prevailing showery weather in the Southwestern part is expected to reduce on Wednesday.

Showers or thundershowers will occur at times in the Western, Sabaragamuwa and Central provinces and in the Galle and Matara districts, while showers may spread to the northwestern province and to the Hambantota district too.

Meanwhile, showers or thundershowers are likely to occur in a few places in the Uva and Eastern province during the afternoon or evening.

Furthermore, the National Building Research Organization has extended the landslide warning issued for 5 districts by 24 hours. 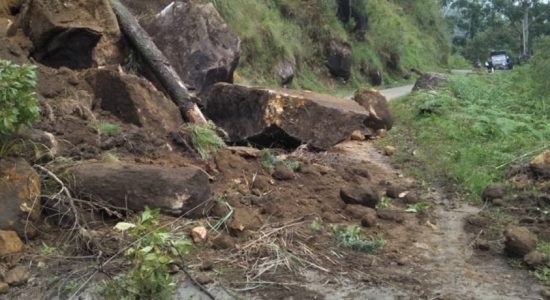