Three people have died and 11 others suffered injuries in motor accidents reported from the Polonnaruwa and Aralaganvila areas.

A group of family members who had been returning from a relative’s wedding ceremony in Alpitiya met with an accident Monday morning.

The accident occurred when a small lorry transporting the 14 family members crashed into a tree in the Magul Damana area along the Dehiaththakandiya-Polonnaruwa main road .

Fourteen individuals, including the driver of the lorry, were admitted to the Polonnaruwa Base Hospital for treatment.

According to the police, three individuals were pronounced dead upon admission to hospital.

The deceased have been identified as a 12-year-old girl, her 32-year-old mother and her 40-year-old uncle.

Meanwhile, an individual assigned to guard the railway gate in the Aluthwewa area in Anuradhapura was knocked down by the Colombo-Vavuniya night mail train .

The accident took place at around midnight Monday and the victim lost his right hand and leg as a result of the accident. He has been identified 37-year-old individual who had been temporarily residing in Aluthwewa.

According to our correspondent, the individual had begun work as a guard one month ago. 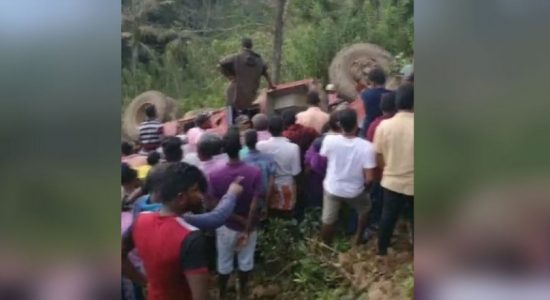