Pope Francis received an invitation to visit Sri Lanka from the Archbishop of Colombo Cardinal Malcolm Ranjith, when he met with a group of Sri Lankan immigrants living in Italy on Saturday.

Vatican radio reported that the group led by Cardinal Ranjith, had come to Rome on the occasion of the 75th anniversary of the consecration of the Church in Sri Lanka to the Blessed Virgin Mary.

In his address to the pilgrims, Pope Francis greeted Cardinal Ranjith, and thanked him for the invitation to visit Sri Lanka.

He said: “I welcome this invitation, and I think the Lord will grant us the grace.”

Pope Francis also spoke about the conflicts that Sri Lanka has faced in recent years.

“Your homeland is called the Pearl of the Indian Ocean, on account of its natural beauty and its shape. They say that the pearl is formed from the tears of the oyster. Unfortunately, many tears have been shed in recent years on account of the internal conflict which caused so many victims and so much damage.”

He also spoke about the need for reconciliation:  “It is not easy, I know, to heal the wounds and cooperate with yesterday’s enemy to build tomorrow together, but it is the only path that gives hope for the future, for development and for peace”. 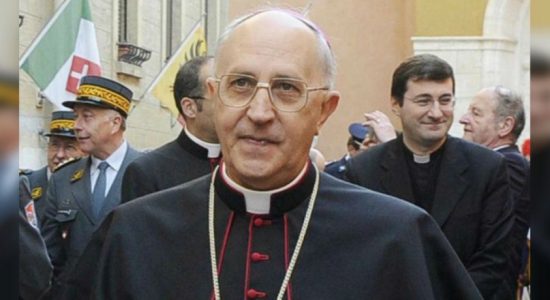