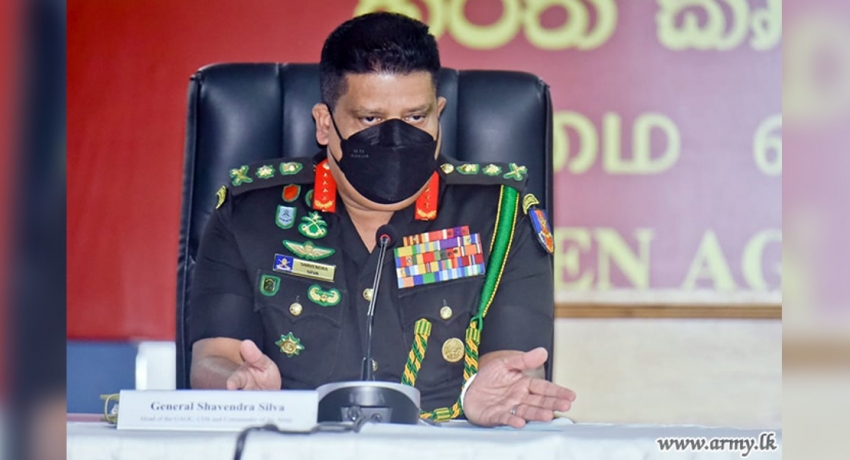 Army ready to tackle all issues with regard to organic fertilizer production: Army Commander

Army ready to tackle all issues with regard to organic fertilizer production: Army Commander

COLOMBO (News 1st); The Sri Lanka Army while closely coordinating and observing the organic fertilizer production process and is equally prepared to continue with awareness projects at all ground levels as well, since the Army has that capacity, says Army Commander Shavendra Silva.

Addressing a forum of coordinators both physically and virtually on Friday (11), the head of the Green Agriculture Operations Center (GAOC) and Army Commander Shavendra Silva assured that if any logistic need or difficulty such as transportation of those raw materials or produced organic fertilizer stocks prevail, the Army would address and help resolve those issues.

“Nothing is impossible and we will tackle them taking a positive stand,” he further stated.

Specifying the Army’s role targeting the ‘Yala’ season in the national drive, he added that the coordination of many rounds of discussions on the subject had already been conducted and such consultations would continue in close liaison with District Secretariats, Agrarian experts, farming communities and state officials while noting their concerns.

Citing the President’s instructions, General Silva noted that sustained education sessions covering ground level contributors would benefit the objective of the project, which the Army is ready to support. Those representatives are thus facilitated at the district level to coordinate with ‘Lak Pohora’ Fertilizer Company, Fertilizer Secretariat, and others. ” Our coordination and observer roles would continue, ” General Shavendra Silva added.

Friday’s meeting at the GAOC chaired by General Shavendra Silva as Head, GAOC was attended by State Minister of Agriculture Hon Shashindra Rajapaksa (MP), Secretary to Ministry of Agriculture Mr. D.M.L.D Bandaranayake, together with a representative gathering of decision-makers, state officials and other stakeholders. The participants at the district level joined the session via zoom technology.

State Minister of Agriculture Hon Shashindra Rajapaksa stated that the production and distribution of Carbonic fertilizer is implemented at the district level with the involvement of each District Secretariat under the close supervision and guidance of the Green Agriculture Operations Centre. This fertilizer operation committee includes the District Secretary, District Agriculture Director, Provincial Deputy Agriculture Director, District Agrarian Commissioner, Green Agriculture Operations Centre representatives, etc. The whole responsibility of production of fertilizer, quantity, transportation, storage, distribution to the farmers, and observing of its use lies with respective district committees, the Minister told the participants.