Farmlands yet to recover from arid weather despite showers

Farmlands yet to recover from arid weather despite showers

In spite of a smattering of showers experienced on Saturday and Sunday evening, more than a million people continue to suffer from the persisting drought.

While paddy fields have been turned into ovens of dry mud cakes, water from the Neela Bemma Ela in Puttalam, is being wasted due to poor irrigation management.

The drought has decimated agrarian communities across the country and in Puttalam too, farmers can only look on as their crops wilt before their eyes.

While about 15,000 hectares are cultivated in Neela Bemma, Nawagaththegama and Anamaduwa under normal circumstances, this season, farmers have only been able to cultivate 5,000 hectares.

Adding salt to their wounds, the Neela Bemma Ela, flows within sight of these villagers.

Farmers point out that as a result of the failure to renovate the Neela Bemma Ela following the floods last year the water cannot be used for irrigation purposes.

News1st made inquiries from the District Secretary of Puttalam.

According to the District Secretary discussions were held with the Irrigation Minister and he promised special support and funds for this move.

“The farmers were asking about this season and if we were to conduct the renovation completely, it would take a lot of time. So, we have used pipes as a temporary measure to carry the water”, he said.

He added that repair work is underway and it should be completed by next season.

“It hasn’t commenced yet, but it will commence when this season is over”,  he said

Meanwhile, the Department of Meteorology is forecasting showers and cloudy skies in some parts of the country over the next two days.

In the forecast issued at noon today, the Met Department noted that as a result of the wave type disturbance in the vicinity of Sri Lanka, intermittent showers, or thundershowers may be experienced in parts of the Northern, North Central, Easter, Central, Uva and Southern Provinces.

However, the Met Department also noted that this would not alleviate the dry weather conditions.

The highest rainfall in the past 24 hours was recorded in Vakarai which received 94.2 milimetres of rain.

Our correspondents noted that a smattering of showers was experienced in parts of the Trincomalee, Vavuniya and Nuwara Eliya Districts. 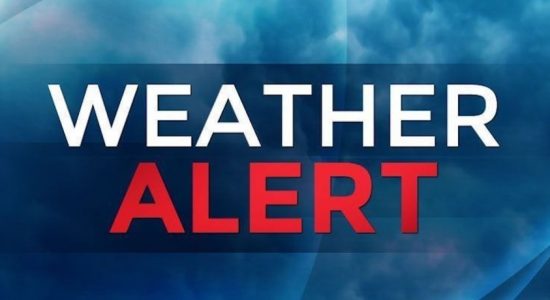