A record 100 million people were expected to watch the face-off between the two candidates ahead of the November 8th election.

The first topic was job creation, with the candidates being questioned on the retention and attraction of American manufacturers back in to the US for production.

“At least I have a plan,” Clinton countered.

“People have looked at both of our plans, have concluded that mine would create 10 million jobs and yours would lose us 3.5 million jobs,” Clinton said

The candidates were not merciful when it came to hitting each other over issues that have hindered their campaigns. :Trump was questioned regarding his refusal to release his tax returns while Clinton had to answer to the controversy over the use of a private email server during her time as secretary of state.

Trump said as soon as Clinton releases 30,000 emails, “I will release my tax returns”.

The second topic of the night was “America’s Direction”, and how to heal America’s racial divide. The issue has been a focul point of tension with the deadly police shootings of black men in Charlotte and Tulsa

“It went before a judge who was a very against-police judge. It was taken away from her and our mayor, our new mayor, refused to go forward with the case,” Trump said. “They would have won an appeal.”

(Fact Check:The lower court’s ruling was the final one ;A federal judge deemed the policy carried out under Michael Bloomberg’s mayoralty to violate the law of the land in August 2013, and Bloomberg vowed to appeal. However a few months later, Bloomberg was out of office, and his liberal successor, Bill de Blasio, dropped the appeal as part of a settlement with New York police in January 2014.)

Clinton jabbed at Trump ,recalling the case against Trump’s family company where it was sued by the justice department for racial discrimination in 1973 for not renting apartments in one of its developments to African Americans. She charged that Trump has a “long history of engaging in racist behavior”

Trump was also questioned on the birther movement where he praised himself for forcing Obama to produce his birth certificate.Trump claimed that a false conspiracy theory about President Barack Obama’s birthplace began with Clinton’s 2008 presidential campaign.

Patti Solis Doyle was on Wolf Blitzer saying that this happened, (Sidney) Blumenthal sent McClatchy, highly respected reporter at McClatchy, to Kenya to find out about it, they were pressing very hard,” Trump said

(Fact Check:Blumenthal, a longtime Clinton friend, denied to CNN last week that he peddled theories about Obama’s birthplace to reporters while Patti Solis Doyle. “The campaign, nor Hillary, did not start the birther movement. Period. End of the story.” She recalled there was a volunteer coordinator in Iowa who forwarded an email propegating the conspiracy, but that Clinton herself decided “immediately” to fire that person. Regarding Blumenthal’s role in the campaign, some 2008 staffers have told CNN that he was not officially part of the Clinton campaign)

” When I got involved I didn’t fail, I got him to give the birth certificate. So, I’m satisfied with it.” he said

The Presidential Debate Commission’s third topic on line-up was ‘Securing America’ which revolved around IS and Cyber-security.

Trump was on his rhetoric of blaming ISIS on former Secretary of State Hillary Clinton. “You’ve been fighting ISIS your entire life” he said

“We should have taken the oil” said Trump who pointed out that if that had happened, ISIL would not have been able to form as oil is a main source of income for the group

(Fact Check:Clinton is 68 years old. The so-called Islamic State did not appear on the scene until 2009, although its roots stretch back to the Sunni terror group al Qaeda in Iraq (AQI), which started in 2004.)

“A man who can be provoked by a tweet should not have his fingers anywhere near the nuclear codes,” said Clinton

Summery: It was the first time the two candidates stood side by side since becoming their parties’ nominees. Trump and Clinton’s 1st showdown showcased a very disciplined Clinton who brought up accusations of not paying contractors,dodging his federal taxes, being a misogynist and promoting “the racist, birther lie” against her Republican opponent . Trump was not be held back with the New-Yorker pulling up the controversy with regard to Clinton’s trade deals, her emails and the Middle East. Two more debates are to follow on October 9 and October 19. 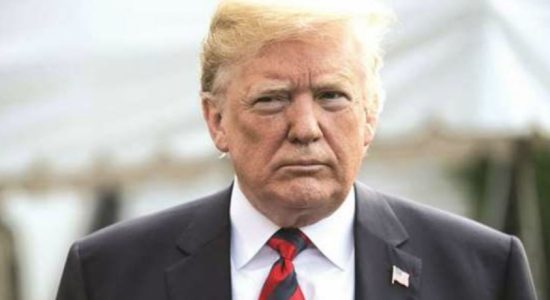