Boston Marathon bomber Dzhokhar Tsarnaev was sentenced to death by a U.S. jury on Friday (May 15) for helping carry out the 2013 attack that killed three people and wounded 264 others in the crowds at the race’s finish line.

After deliberating for 15 hours, the federal jury chose death by lethal injection for Tsarnaev, 21, over its only other option: life in prison without possibility of release. Speaking after the sentencing Boston prosecutor Carmen Ortiz said the “gravity of harm” following the bombings showed that it was an act of terrorism.

The same jury found Tsarnaev guilty last month of placing a pair of homemade pressure-cooker bombs on April 15, 2013, as well as fatally shooting a policeman. The bombing was one of the highest-profile attacks on U.S. soil since Sept. 11, 2001.

During 10 weeks of testimony, jurors heard from about 150 witnesses, including people whose legs were torn off by the shrapnel-filled bombs. William Richard, the father of bombing victim Martin Richard, described the decision to leave his 8-year-old son to die of his wounds so that he could save the life of his daughter, Jane, who lost a leg but survived.

Prosecutors described the former high school wrestler, who is an ethnic Chechen, as an adherent of al Qaeda’s militant Islamist views who carried out the attack as an act of retribution for U.S. military campaigns in Muslim-dominated countries.

Defense attorneys opened the trial on March 5 with the admission that Tsarnaev committed all the crimes he was accused of but they argued that he was a junior partner in a scheme hatched and run by his 26-year-old brother, Tamerlan. Tamerlan died after the gunfight, which ended when Dzhokhar ran him over with a stolen car.

The jury found Tsarnaev deserved execution for six of the 17 capital charges of which he was found guilty. Those counts were the ones tied to the bomb that he personally placed at the marathon finish line, which killed Richard and 23-year-old Chinese exchange student Lingzi Lu. 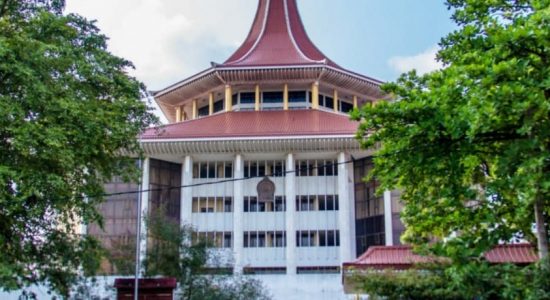 Muthurajawela is destroyed by the politicians: President

Muthurajawela is destroyed by the politicians